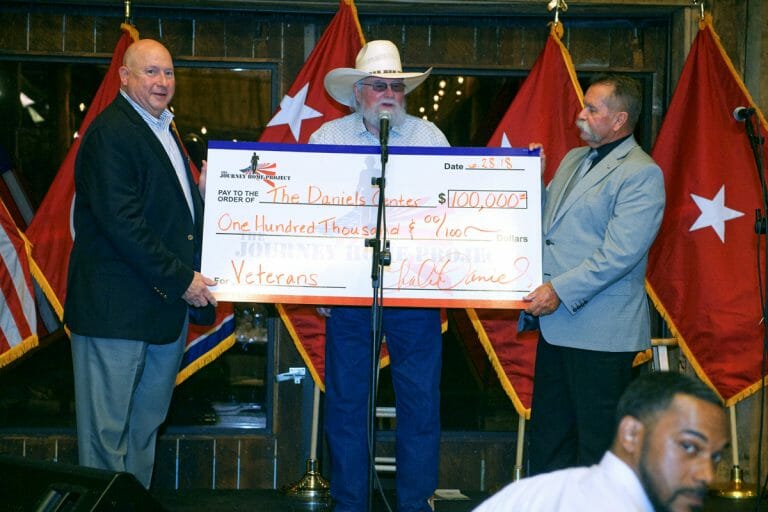 Legendary country music superstar Charlie Daniels shook hands and mixed and mingled many of the more than 200 people attending the inaugural MTSU Veteran Impact Celebration Thursday, June 28, at The Grove at Williamson Place in Murfreesboro.

Daniels held court for an hour for a number of news media wanting interviews. Later, he performed “In America” and “My Beautiful America” with his band and offered a patriotic recitation, recalling German warships in the Atlantic Ocean near his Wilmington, North Carolina, hometown as a young boy.

Coupled with more than $41,000 raised through corporate sponsorship of tables for the sold-out event, gifts in kind and pledges, Daniels Center officials estimate about $171,000 raised for the center.

The 3,200-square-foot Daniels Center is the largest and most comprehensive veterans center in Tennessee and one of the largest in the nation. It serves MTSU’s nearly 1,000 student veteran and military family members on campus, giving them a one-stop-shop to meet many academic, Veterans Affairs and career needs.

Daniels, 81, a Country Music Hall of Fame member, performed near the end of the program along with Scott Brown of the Scooter Brown Band and four performances by Operation Song singers and songwriters who have been assisted by Nashville Songwriters Hall of Fame members.

“Freedom is not free,” said Daniels, who praised the Daniels Center that bears his and his wife’s names. “There are two things you can count on — the grace of God and the U.S. military. … We fully intend to make this an annual event.”

MTSU President Sidney A. McPhee said the “university’s efforts to give back would not be nearly as comprehensive and impactful if not for the individuals, businesses, governmental agencies and nonprofits who have opened their hearts to provide so generously to MTSU’s programs, centers and initiatives. Tonight, we also celebrate these organizations and individuals for empowering our efforts.”

McPhee thanked Charlie and Hazel Daniels, Corlew and The Journey Home Project and the “corporate sponsors and the employers who have partnered with us to help our veterans transition to their next career path.”

Keith M. Huber, MTSU’s senior adviser for veterans and leadership initiatives, welcomed the invited guests and shared how the Daniels Center has an ongoing commitment to those who have served in the U.S. armed forces.

Center officials already are planning for the second Veteran Impact Celebration, which will be held June 27, 2019 — the first Thursday before the July 4 holiday. Hiller owner Jimmy Hiller has agreed to be the major sponsor next year.

MTSU has more than 240 combined undergraduate and graduate programs.